The Temple House Vanishing by Rachel Donohue serves up the perfect summer read, a literary gothic novel set at an all-girls Catholic boarding school in Ireland. A student and a teacher disappear. The unsolved mystery rivets the nation. Twenty-five years later, a reporter is determined to uncover the truth. What she finds are stories of jealousy and revenge, power and class. But at Temple House School, nothing is ever as it seems.

Start reading this evocative and mysterious debut, dark academia at its best, with this excerpt: 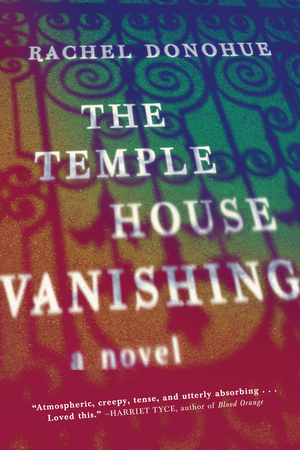 Mr. Lavelle, my favorite teacher at Temple House, once said there is something inherently dark and powerful at play in adolescence. A kind of alchemy that takes place underneath the surface of everything, including your skin. It bursts out in different ways and, depending on the era in which you live through, it will be met with hysterical fear and damnation or just attempts at coercive control. It’s the necessary thwarting of an emergent power.

I told him that’s why they tell us fairy tales when you’re young. They tell you that you are powerless so as to make you less powerful. Don’t go to the woods, for if you wander you will get lost and there is darkness everywhere. Wolves in the undergrowth. And be warned, only the pure and the lucky will be rescued.

He laughed at this and said of course we were the perfect fairy tale. The girls in the Victorian mansion on the hill, surrounded by fields, trees and the sea. A world of lemon polish and silence, incense and martyrs. The black wrought-iron gates locked to keep out the world and the changes he said were coming.

It was a life where in the last class on a Tuesday we typed job application letters to fictitious companies on large computers. Phones were attached by thick black cords to walls in drafty corridors and every few weeks we would kneel in the dark before a man to tell him our sins. It was a hermetically sealed universe of tradition and ritual, prayers and devotions, where the individual was born into Original Sin and required to examine their conscience and seek forgiveness. Endlessly. And we as teenage girls had much to make amends for. As Mr. Lavelle said, alchemy was everywhere.

Those first few days, of course, I had no idea of the extent of this. As I dressed that first morning after my sleepless night thinking about the dead nun, I became convinced I needed a backstory, one that would be unusual. I couldn’t fake being rich. Instead I thought I would go the bohemian route and claim my father was a writer and my mother a painter. We would be unusual. I would reinvent myself.

The first full day began with breakfast in the long hall, followed by a short assembly at eight fifteen that was led by Sister Frances, the Deputy Principal. We stood in lines in front of the stage. I accidentally joined the third years before hissing from several of the girls indicated I had made a major error. I briefly saw one of the other new girls who I had met the afternoon before. Her eyes looked huge and uncertain. I found my place at the back of the correct line. The girl in front of me smelled of sweat and her hair was greasy, tied up in a limp ponytail. The back of the line was clearly for the losers. The girl in front of her had spots on the back of her neck that every now and then she would pick at.

The prefects stood at the top of the Hall and for about three minutes they pointed and directed us until the lines were perfectly straight. All the while, Sister Frances stood on the stage, her head nodding up and down with each direction given. Her face was almost completely round and shiny, like a kind of ruddy apple.

When the lines were deemed appropriately straight, the prefects took their places and we waited for Sister Frances to speak. I expected the kind of sentimental speech that my old school principal would give, one where she told us we each had a talent that they, the teachers, would endeavor to excavate over the next year, while also warning us not to smoke or take drugs. But it was not to be.

Sister Frances spoke a prayer in Latin for a few minutes. I was oblivious to its meaning though charmed by the enigma of the words. Then she went silent and bowed her head. A strategic pause that lasted for two minutes. I knew this because I kept watching the clock on the wall in the corner. No one moved or even took a breath, it seemed. Finally, she raised her head and led us in a decade of the rosary. The hum of the voices in unison was vaguely comforting though the words over time became mangled and indistinguishable and every now and then I would lose my place. When it was finished she made a sign of the cross that we copied. She then left the stage, disappearing behind the dusty red velvet curtain that had framed her.

It was a dispiriting end. We didn’t even get a timetable.

We were divided up into small classes that switched between subjects every forty-five minutes. Anyone who did make eye contact looked away quickly enough. I felt like a ghost. With each ring of the bell, I had to try and find my way down back stairs and corridors. The house had clearly never really been adapted to be a school. Some of

the classrooms had fireplaces in the corners and cornicing, or a lone chaise longue under a window. French class was on the first floor in what must have been a drawing room at one time. Mustard-colored curtains framed the large windows that faced the sea and a chandelier with some of its crystals missing hung at an awkward angle in the center of the room.

The teacher of that class was somewhat glamorous and very thin. She had short blond hair and was tanned. She was also French, which the teacher in my last school had not been. She was not friendly in any way and when she asked me to describe my summer holidays she winced openly at my accent. A few people laughed and the teacher frowned at them. She disliked us all equally, which was some consolation.

As the day wore on I did get some sense of who was in my class and what they were like. The few conversations I overheard offered fleeting glimpses of boats moored on rugged coastlines and hotels with terraces that hung over lakes. I also began to get some idea as to who was who. There was a group of three girls who moved as one in the corridors. They were leisurely and commanding in their ease, with the dull, listless expressions of those who know too early they are beautiful. They all had fair hair and wore small pearl earrings and the same brown brogues, their white socks perfectly straight. The others always left three empty seats for them at the back of each class. Then there were the duds, the ones who had stood at the back of the line with me. They had spots and cold sores and hair that seemed less shiny. And in between was everyone else, the blurred masses of the average.

The final class of the day was art. By then I was exhausted and presumed I could just sleep through it as I had done in my previous school. To reach the art room we had to leave the building and walk through a walled vegetable garden at the back of the house. Unlike the gravel drive and manicured lawn at the front of the building, this seemed surprisingly unkempt and scruffy. We followed the path through the garden and out of a gate in the wall that led to the edge of the woods to a small summer house. A thick vine grew over the door, which was open, and a man stood, smiling and waiting for us. He was tall and lean, with fair hair. He looked young. The air was filled with the smell of wood and peat burning. A kettle was whistling in the gloom behind him.

It was here I met Victoria. And Mr. Lavelle.

After that, everything changed.

Buy your copy of The Temple House Vanishing by Rachel Donohue now.

Enter for a Chance to Win The Temple House Vanishing