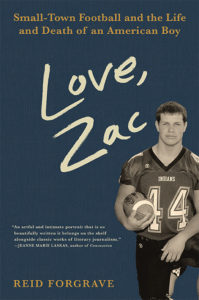 Please fill out the form below to request a physical galley of Reid Forgrave’s Love, Zac (on sale September 8, 2020). We will fulfill requests while supplies last. Alternatively, the e-galley is also available on Edelweiss and NetGalley.

“What an accomplishment. Brimming with compassion and insight, Reid Forgrave has written an artful and intimate portrait of a former high school football star that travels ambitiously into themes of masculinity, suffering, and the nature of a national obsession. Love, Zac is not just a vital contribution to the national conversation about traumatic brain injury in athletes, it’s so beautifully written it belongs on the shelf alongside classic works of literary journalism.” —Jeanne Marie Laskas, New York Times bestselling author of Concussion

“A monumental achievement of deep reporting and expert storytelling.”
—Michael Sokolove, author of The Last Temptation of Rick Pitino

“I just can’t live with this pain anymore,” were among the final words in the diary of Zac Easter, a young man from small-town Iowa. In December 2015, Zac decided to take his own life rather than continue his losing battle against the traumatic brain injuries he had sustained as a no-holds-barred high school football player. In this deeply reported and powerfully moving true story, award-winning sportswriter Reid Forgrave speaks to Zac’s family, friends, and coaches; he explores Zac’s tightly knit, football-obsessed Midwestern community; he interviews cutting-edge brain scientists, psychologists, and sports historians; and he takes a deep dive into the triumphs and sins of the sports entertainment industry.

Forgrave shows us how football mirrors America, from the fighting spirit it has helped inscribe in our national character to the problematic side effects of traditional notions of manhood that it affirms. But, above all, this is a story of how one young man’s obsession with football led him and many of those entrusted with his care to ignore the warning signs of CTE until it was too late. What do Zac’s life and death mean for a society addicted to a sport that can be thrilling and character forming but also dangerous and sometimes tragic for those who play it?

Eye-opening, important, and ultimately inspiring, Love, Zac challenges us to think carefully about the ideals and values we as a nation want to instill in future generations.

Reid Forgrave writes about sports and other topics for GQ, the New York Times Magazine, and Mother Jones, among other publications. He has covered the NFL and college football for FoxSports.com and CBS Sports, and he currently writes for the Star Tribune in Minneapolis. The article in which he first wrote about Zac Easter is included in Best American Sports Writing 2018. A past life found him working at the Des Moines Register in Iowa, where he wrote long-form narrative journalism and covered the state’s first-in-the-nation presidential caucuses. Forgrave lives in Minneapolis with his wife and two sons. Love, Zac is his first book.