Critically acclaimed and Whiting Award–winner Kaitlyn Greenidge returns Libertie, a brilliant new novel—one of the most anticipated of the year! Read this excerpt, the opening of an unforgettable story about one young Black girl’s attempt to find a place where she can be fully, and only, herself. 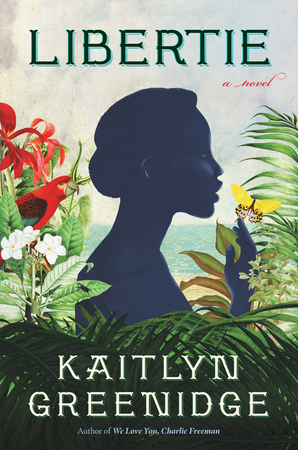 I saw my mother raise a man from the dead. “It still didn’t help him much, my love,” she told me. But I saw her do it all the same. That’s how I knew she was magic.

The time I saw Mama raise a man from the dead, it was close to dusk. Mama and her nurse, Lenore, were in her office—Mama with her little greasy glasses on the tip of her nose, balancing the books, and Lenore banking the fire. That was the rule in Mama’s office—the fire was kept burning from dawn till after dinner, and we never let it go out completely. Even on the hottest days, when my linen collar stuck to the back of my neck and the belly of Lenore’s apron was stained with sweat, a mess of logs and twigs was lit up down there, waiting.

When the dead man came, it was spring. I was playing on the stoop. I’d broken a stick off the mulberry bush, so young it had resisted the pull of my fist. I’d had to work for it. Once I’d wrenched it off, I stripped the bark and rubbed the wet wood underneath on the flagstone, pressing the green into rock.

I heard a rumbling come close and looked up, and I could see, down the road, a mule plodding slow and steady with a covered wagon, a ribbon of dust trailing behind it.

In those days, the road to our house was narrow and only just cut through the brush. Our house was set back—Grandfather, my mother’s father, had made his money raising pigs and kept the house and pens away from everyone else to protect his neighbors, and his reputation, from the undermining smell of swine. No one respects a man, no matter how rich and distinguished-looking, who stinks of pig scat. The house was set up on a rise, so we could always see who was coming. Usually, it was Mama’s patients, walking or limping or running to her office. Wagons were rare.

When it first turned onto our road, the cart was moving slowly. But once it passed the bowed-over walnut tree, the woman at the seat snapped her whip, and the mule began to move a little faster, until it was upon us.

I opened my mouth, but before I could call for her, my mother rushed to the door, Lenore behind her.

“Quick,” was all Mama said, and the woman came down off the seat. A boy, about twelve or thirteen, followed. They were both dressed in mourning clothes. The woman’s skirt was full. Embroidered on the bodice of her dress were a dozen black lilies, done in cord. The boy’s mourning suit was dusty but perfectly fit to his form. At his neck was a velvet bow tie, come undone on the journey. The woman carried an enormous beaded handbag—it, too, was dusty but looked rich. It was covered in a thousand little eyes of jet that winked at me in the last bit of sun.

My mother stepped down off the stoop then, and the four of them lifted it up and managed it into the office. As soon as they got it inside, they set it on the ground and pushed it home. I could hear the rough pine shuffling across the floor.

“Don’t start with me, Cathy,” the woman said, and Lenore looked up, and so did I. No one, except Grandfather before he died, dared call Mama “Cathy.” To everyone except for me, she was always “Doctor.” But Mama did not bristle and did not correct, as she would have with anyone else.

“Word was you’d be here at midnight.”

Mama watched, eagerly. We all did. I crossed the room to stand beside her, slipped my hand into hers.

Mama started at my touch. “If you’d only come later.”

The woman’s head jerked up, her expression sharp, and then she looked at my hand in Mama’s, and her frown softened.

“I know we’ve done it differently. This time we really tried,” she said. “Besides, my Lucien sees all this and more. If you do this work, Cathy, your children will know sooner or later.”

Mama did not take advice from anyone, certainly not advice on me, but she said nothing at this softest of rebukes, only watched the woman and her son.

The boy, Lucien, pulled hard, and when the final nail was out, he and Lenore pulled at the splintering plank until it gave a terrible yawn. And then I saw:

a man curled in on himself like a dried mulberry leaf,

his skin gray, his eyes open and staring,

his pants damp. He smelled sharp,

like the spirits Lenore used to cut Mama’s medicines.

The woman gasped and reached for the boy and held him close. Lenore gasped, too. Mama let go of my hand and knelt down at the side of the coffin. She held her ear over the man’s open mouth, and her eyes went blank, that look she always got when she left this world and entered the one of her mind.

She stood up suddenly. “The arnica, please,” she said to Lenore, who hurried to the shelf over Mama’s worktable.

Lenore held the big glass jar close to her chest, then set it down beside the coffin. Without looking at her, never taking her eyes off the dead man, Mama held out her right hand.

Lenore counted them out.

I watched the yellow pellets move from the jar to Mama’s open palm. Mama wet the fingers of her free hand with her spit, the better to gain purchase, and then pinched each grain, one by one, from her right palm and fed them into the dead man’s mouth.

“He wasn’t like that when we put him in, Cathy,” the woman said. Lucien turned his face into her side, and I felt a flash of pride, that a boy bigger than me couldn’t watch what I could.

Thirty seeds passed between his lips.

The last five left them yellow.

Mama stood up. The man lay still in his coffin. Mama put her hands on her hips, frowned. Then she knelt down suddenly and whacked his back. The man sputtered and coughed and made the lowest moaning sound. His eyes blinked, and he rolled them up to look at all of us, from his resting place.

The woman sighed. “Cathy, I don’t know what we would have done—”

“Well, we don’t have to wonder.” Mama wiped her hands on her skirt. The man in the coffin was still groaning.

“He was so eager to keep going,” the woman said. “He and his sister came to us three days ago. He said he should leave before his sister. That he was strong enough to make it first. But when he saw how he had to come, he got scared. He was shaking something fierce.”

“I told him, ‘Me and Manman took a girl not but ten years old this way, and she was brave and didn’t cry the whole time,’ ” Lucien said. He was much recovered now and had stepped away from his mother’s side. “I said, ‘Be brave, Mr. Ben.’ ”

“Last night, he disappeared,” the woman said. “That’s why we left at the wrong time. He went missing and almost killed us all. He was down in Market Square, begging for whiskey to help him through. I said, ‘You fool,’ but he was already drunk by the time he got back. Pierre told me to wait till he sobered up, but if we’d done that, he would have kept yelling, drawing even more attention to us. It took Pierre and Lucien both to get him in the box, and the whole

time he was hollering that we were trying to kill him. He kept saying ‘Damn, nigger, what’d I ever do to you?’ ”

Mama started to laugh but caught herself. Instead, she said, “How did you get him to be quiet?”

“I soaked that rag in some laudanum and stuffed it in his mouth, and then he fell right still. When we nailed the top on, I swear he was still breathing.”

Mama shook her head. “You always overdo it, Elizabeth,” she said, and then we all heard a great whoosh as Mr. Ben sat up in his coffin and began to cry.

“That black bitch right there promised to get me out. They all said she can get you out. No one ever said it was like this. In a goddamn coffin.” Mr. Ben was upright, and I could see him clearly. The color came back to him—his skin was a dark brown. I liked his face. It was soft and, I thought, handsome, made more so by his cheeks and chin. They rounded in to the pout of a spoiled and much-loved baby. I could not tell how old he was—his skin was smooth, but his hair, what was left of it, was turning gray and clipped close to his skull. He wore a graying shirt and britches and no hat. His hands were enormous and calloused. He was crying, loud, racking sobs that I did not think a grown person could make. He made no move to leave his coffin, and my mother and the woman made no move to comfort him.

Mama pursed her lips. “Is this his final destination?”

“We take his sister to Manhattan next month.”

“Then perhaps Mr. Ben can wait for her there. Mr. Ben,” Mama said, “you will have to stay the night here, but I trust we can count on you to be quiet?”

Mr. Ben did not look at her; instead, he gazed up at the ceiling. “As long as I don’t ever have to sleep in any coffin.”

Mama laughed. “Only the good Lord can promise that.”

Buy your copy of Libertie by Kaitlyn Greenidge now.

Read an Excerpt from Silence Is a Sense by Layla AlAmmar

Read an Excerpt from Hot Stew by Fiona Mozley