These days, we’re all spending our work time, free time, and social time at home. That means it’s time to pick up some new hobbies, and William Alexander knows just the thing—or three—you can do. If you’ve found yourself contemplating a sourdough starter or dreaming about starting the perfect garden, why not get a little advice first, from a man who’s tried it all? From agonizing over the financial and emotional cost of his tomato plants to learning a new language—and more about himself— check out this guide to stay-at-home hobbies as you stay safe and learn something new. 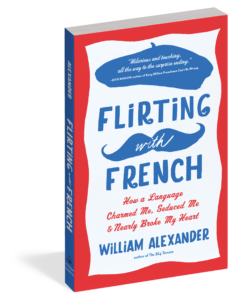 “A delightful and courageous tale and a romping good read. Voila!” —Mark Greenside, author of I’ll Never Be French (No Matter What I Do)
William Alexander is more than a Francophile. He wants to be French. There’s one small obstacle though: he doesn’t speak la langue française. In Flirting with French, Alexander sets out to conquer the language he loves. But will it love him back?
Alexander eats, breathes, and sleeps French (even conjugating in his dreams). He travels to France, where mistranslations send him bicycling off in all sorts of wrong directions, and he nearly drowns in an immersion class in Provence, where, faced with the riddle of masculine breasts, feminine beards, and a turkey cutlet of uncertain gender, he starts to wonder whether he should’ve taken up golf instead of French. While playing hooky from grammar lessons and memory techniques, Alexander reports on the riotous workings of the Académie française, the four-hundred-year-old institution charged with keeping the language pure; explores the science of human communication, learning why it’s harder for fifty-year-olds to learn a second language than it is for five-year-olds; and, frustrated with his progress, explores an IBM research lab, where he trades barbs with a futuristic hand-held translator.

Does he succeed in becoming fluent? Readers will be as surprised as Alexander is to discover that, in a fascinating twist, studying French may have had a far greater impact on his life than actually learning to speak it ever would. 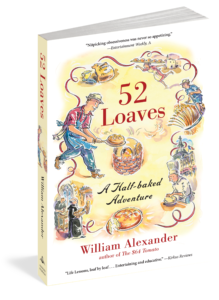 William Alexander is determined to bake the perfect loaf of bread. He tasted it long ago, in a restaurant, and has been trying to reproduce it ever since. Without success. Now, on the theory that practice makes perfect, he sets out to bake peasant bread every week until he gets it right. He bakes his loaf from scratch. And because Alexander is nothing if not thorough, he really means from scratch: growing, harvesting, winnowing, threshing, and milling his own wheat.

An original take on the six-thousand-year-old staple of life, 52 Loaves explores the nature of obsession, the meditative quality of ritual, the futility of trying to re-create something perfect, our deep connection to the earth, and the mysterious instinct that makes all of us respond to the aroma of baking bread. 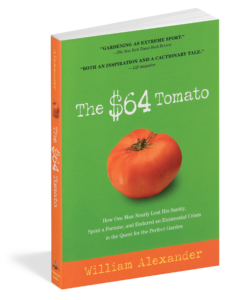 Bill Alexander had no idea that his simple dream of having a vegetable garden and small orchard in his backyard would lead him into life-and-death battles with groundhogs, webworms, weeds, and weather; midnight expeditions in the dead of winter to dig up fresh thyme; and skirmishes with neighbors who feed the vermin (i.e., deer). Not to mention the vacations that had to be planned around the harvest, the near electrocution of the tree man, the limitations of his own middle-aged body, and the pity of his wife and kids. When Alexander runs (just for fun!) a cost-benefit analysis, adding up everything from the live animal trap to the Velcro tomato wraps and then amortizing it over the life of his garden, it comes as quite a shock to learn that it cost him a staggering $64 to grow each one of his beloved Brandywine tomatoes. But as any gardener will tell you, you can’t put a price on the unparalleled pleasures of providing fresh food for your family.

Pages to the Past: A Celebration of Historical Fiction